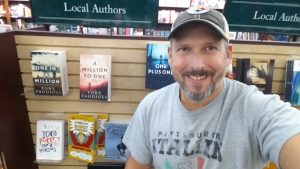 Me. At Vroman's Bookstore. Being a geek.

As I wrote A Million to One (Book 2 of The Millionth Trilogy) I wanted to tell the story of hell and hell on earth. That’s why two characters are scrambling for survival across a barren land filled with horrors unimaginable, while two other characters are in a small town trying to chase down a psychopathic killer. Evil had to be made obvious in both places because evil exists in both places. And, to my mind, anyone who can carve another human being into pieces is nothing less than a demon “in-waiting” anyway. Book 2 is a hard, vicious book that was created to make the reader feel very uneasy. When Kirkus Reviews later compared the killer in A Million to One to Hannibal Lecter from The Silence of the Lambs? I was flattered, yes, but I also knew that I’d done my job.

When it was time to write One Plus One (Book 3 of The Millionth Trilogy) I took a deep breath. If Book 2 was about hell and hell on earth, then the final book had to bring to bear the redemptive qualities of faith, repentance and salvation. In short, it had to be about heaven and heaven on earth. About loving and caring, seeking and overcoming. The strap-line for the book cover says it all: Love is promise. You just have to believe. And if you think about it, in this chaotic life, love is what we all cling to, believers and unbelievers alike. It’s our common ground and an instinctive need. As I marched towards the conclusion of the story I had so many instances where the characters took over the keyboard. It was the coolest thing ever. Thus far, it is the highest rated book in the series on Amazon (4.9 out of 5 stars) and for a guy who always writes the endings to his stories first? That’s a great feeling.

At the back of the final book in The Millionth Trilogy there is an opportunity for readers to fill out a survey. It was a last minute idea and at the time I figured, “Who knows? Maybe someone will actually fill one out.” Since then? I don’t know. Sometimes I sit here, scratch my head and wonder if it all isn’t just a dream. Those surveys are trickling in from all over the place…from many cities across the U.S. and the UK, to Mooi River, South Africa…New Brunswick, Canada…Serdynia, France…Tesanj, Bosnia…Koronadal City, Philippines…Timaru and Wellington, New Zealand…Oulu, Finland…and Jurbise, Belgium. In addition, my Amazon sales reports are telling me that my second biggest audience is down under in Australia, with Germany close behind. I mean…wow.

Thanks again to each of you for reading my stories. You make them worth writing. The next book is coming soon (see below) and I can't wait.

ANNOUNCEMENTS:  My next book, The Snow Globe, comes out in about a month. The Official Launch Party will be at Flintridge Bookstore (1010 Foothill Blvd., La Canada, CA) on Sunday, April 2nd from 4-6pm. There will be coffee, tea and treats (my lovely wife would have it no other way) and raffle prizes (because my kids love to make their father give things away! Ha). I really hope you can make it.

So…Moving Right Along!
So…The Snow Globe
Be the first to know about new releases & events—subscribe to Tony’s newsletter. GET MY FREE BOOK! »
©2022 Tony Faggioli — All Rights Reserved
Privacy Policy
Website by Memphis McKay