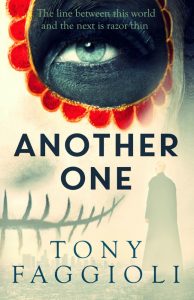 In a little over three weeks, on Monday, September 18th, “Another One”, the newest book in The Millionth Series will be released. It is Book 1 of “The Parker Trilogy” and picks up four months after the ending of the “The Fasano Trilogy” (One In A Million, A Million to One and One Plus One). You do not have to read the first trilogy to enjoy the second. Above is a sneak peek of the cover. I hope you like it!

You can PRE-ORDER your copy of “ANOTHER ONE” now simply by clicking this link: https://books.pronoun.com/another-one/

Why September 18th? Because it’s the one-year anniversary of my official launch party last year (I know, I can't believe it either). Why this particular story? Well, it started with people who had finished the first trilogy and wrote me to say how much they liked it…and then immediately demanded to know what happened to Detective Evan Parker!!! LOL. I understood. When last we see Parker, he's in a pretty sad state. But I was a little worried because I wasn't sure if there was still more of the tale to tell.

But when I sat down and thought about how the story would continue? It happened again: idea after idea seemed to jump out at me. There was this priest, alone and afraid. But…why? There was this gangster with a black eyed, Dia de los Muertos tattoo who quoted Gibran. But…why? And then there was Parker, back on the job and patrolling the mean streets of East L.A., barely holding it together. But…why? Before long, I was waking up at 3am again, with one scene or another flashing across my mind.  The baristas at my local Starbucks didn’t even have to ask. Here I came again, at 5am, before they were done even taking the chairs off the tables or brewing the first batch of coffee. They knew I was writing another book.

I put together a decent music catalog that was carrying me along, but it would be the Acquisitions Manager at Blackstone Audio who would share with me a performance she had seen one weekend in NYC of this incredible song. “Have you ever heard it?” she asked. “It’s called Ombra Mai Fu.” I looked up a version of it on Spotify by Aya Makino and…well…alllll the dominos began to fall. It was exhilarating.

Anyway, I hope you get “Another One” and enjoy it. A special shout out to my editor, Sophie Playle of Liminal Pages, my cover designer Andrew Brown of Design for Writers and all the members of Team One, my advance reader team. I couldn't have done it without you guys!

And yeah…thank YOU, too. Have I told you lately that You Rock? Well, you do.

THE NEW YORK REVIEW OF BOOKS contacted me to inform me that they wanted to promote The Snow Globe in their September 28th issue!!! Upon hearing this news, Vroman’s Bookstore in Pasadena immediately extended my consignment agreement for six months and Flintridge Bookstore in La Canada sent out an email blast to their customers. It was actually one of two proud and humbling moments this month.

MIDWEST BOOK REVIEW provided the second moment when they sent me an email informing me that they had read and reviewed The Millionth Series. I was stunned. Established in 1976, MBR is highly regarded, takes no fees, and from what I’ve heard, typically turns away 3 out of every 4 books that are submitted to them.  That they read and were recommending all three books of the trilogy knocked me out of my chair and their review was so solid that my cover designer is now scrambling to add it to the cover of One In A Million.

So…Chasing Your Heroes
So…One Year
Be the first to know about new releases & events—subscribe to Tony’s newsletter. GET MY FREE BOOK! »
©2022 Tony Faggioli — All Rights Reserved
Privacy Policy
Website by Memphis McKay