Over ten years ago, I was driving to my creative writing class at Pasadena City College when a song came on the radio. It was “Precious Things” by Tori Amos. To this day I have no idea how I finished that drive. The song put me completely on auto-pilot. In my head, there was suddenly a pretty, blonde woman…who was trying to tell me a very ugly truth.

I parked, went to the quad and scribbled out the opening scene of a short story that I would later finish and title, “The Snow Globe”. My class loved and hated it. My crit group mostly loved it. So I turned it into a bloated 110,000-word novel…my first…that was subsequently rejected by 110 agents. At that point, I sadly put the book away. Maggie, the lead character, went backstage in my mind. But we made a deal, you see, that someday she'd get her chance to come back out, under the lights.

That day arrived in March, when I published a newly (and painfully) edited version of the novel with the help of my editor, who grossly mistreated me and hurt my feelings on a number of occasions. Hahaha. Just kidding (she'd be the first to tell you that I'm a big baby). In September, The Snow Globe was in The New York Review of Books and this month, dozens of copies were distributed on subways and in subway stations across New York City by Books on The Subway, a non-profit that promotes literacy and book sharing (pics below).

The book has done well. It gets a reaction. It tells ugly truths, yes, but in the context of what I hope is a liberating message. I've had a few psychologists reach out to me to discuss some aspects of how the book deals with trauma, memory, and recall. But most touching? I've had victims of domestic abuse, stalking and rape email me. To tell me their stories. To show me that reality can be waaaay more terrifying than fiction.

In the name of those victims? I've decided to donate ALL sales of The Snow Globe for the month of October (National Domestic Violence Awareness Month)  to Safe Horizon, an organization that runs a fantastic network of women's shelters across New York City (Maggie's fictitious home base). Please buy a copy of the book OR just donate directly to Safe Horizon. There are only 5 days left in October and every dollar helps!

Thanks for reading,
Tony 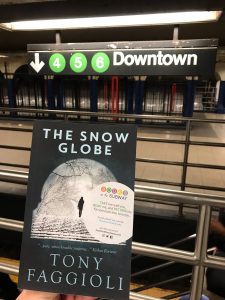 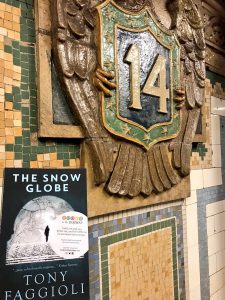 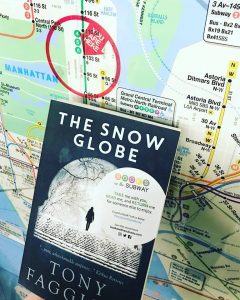 So…One Year
So…Along Came A Soldier
Be the first to know about new releases & events—subscribe to Tony’s newsletter. GET MY FREE BOOK! »
©2022 Tony Faggioli — All Rights Reserved
Privacy Policy
Website by Memphis McKay