I'm proud and humbled to announce that Blackstone Audio, one of the top companies in the audiobook industry, has optioned the rights to The Millionth Trilogy. The deal was cut last month, right as I boarded a plane for Pittsburgh to visit my family and just one day before the release of my newest novel, The Snow Globe. Then, last week, with all the final details ironed out, the contract was fully executed and I’m pleased to say that Book 1, One In A Million is already in production! .

Blackstone will be producing and marketing all three books on multiple platforms, including their website downpour.com

Here are the scheduled release dates:

Two of the three dates will be over the 4th of July and Labor Day holiday weekends, which can only help to increase exposure for the books. I want to thank the awesome staff at Blackstone for believing in me and this story. It means so much. And I plan on being a very motivated business partner with them going forward.

As an author, you just want to write. But as an Indie Author, you have to put your business hat on, too. I’ve spent the last six months rolling out one promotion after another. Some for sales, others for exposure and still others for email subscribers/followers. I’ve gone national with display ads on Amazon, Facebook, Twitter and Bookbub…mid-level with Goodreads and sample chapters on Instafreebie…and local with Vroman’s Bookstore in Pasadena and Flintridge Books in La Canada. Even the local Starbucks, where I sometimes do my writing, has allowed me to post flyers for my events and releases, as has The Coffee Bean. You want a P.R. Department? I dare you to find one better than your local team of baristas! Slow, but sure, it's all beginning to pay off.

As for you? Have I told you lately that You Rock? Because, well, YOU DO! Thanks for helping this crazy dude’s dreams come true, one story at a time. Next up? “Another One”, Book 4 of what has now become The Millionth Series. 70k words done, 20k to go. Publication date set for June or July. Stay tuned!

Vroman’s Bookstore has now taken The Millionth Trilogy and given it double exposure on the main floor. Now, it’s not only in the Local Author Section but also on display in the mainstream Mystery Section!!! As a lifelong fan of Ed McBain and Robert B. Parker, this sent me to the moon and back about fifty times! Vroman’s has also informed me that they will be taking on The Snow Globe as well. It should be up and on display by May 10th.

Speaking of The Snow Globe? The Book Launch Party at Flintridge Bookstore was a full house (pics below), which made me a tad emotional when I went up to do my reading. I know…such a sap. But it was a wonderful bookend to last September’s Book Launch Party for The Millionth Trilogy (with an awesome book signing event at Vroman’s sandwiched in between) and I was kind of overwhelmed by the moment. What a great, supportive crowd though. 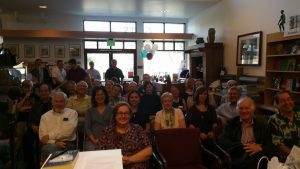 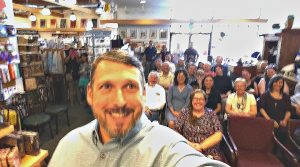 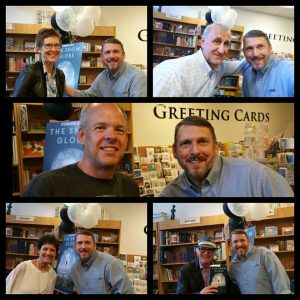 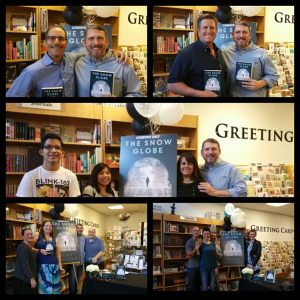